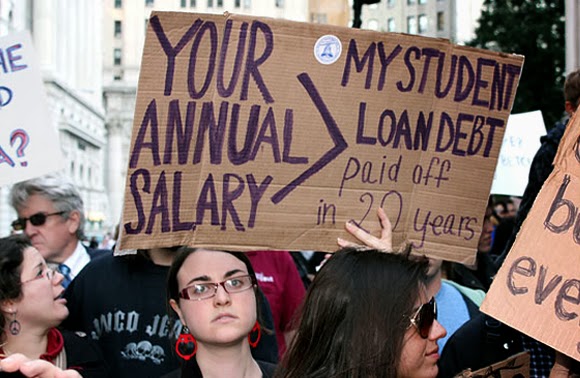 Graduated from four-year universities,
the average student debt for one person is about $25,000 (about 27.17 million KRW).
However this is the average value,
a lot of actual college graduates is estimated to be
fallen into $50,000 (approximately 54.35 million KRW) of student loan debt.

CBS interviewed with Betty '(27-year-old female),
who’s a teacher of a junior high school in Maryland.
To barely manage to eke out a living and pay off the debt,
minimum salary should be $60,000 (approximately 65.22 million KRW)
but she only earned $13,000 (about 46.74 million KRW) last year.
This was all in spite of her book organization and
serving as a church choir as increased income.
Betty is currently working as a waitress in a restaurant in the evening.

University students are speaking out of anger with handful of
burning student loan documents, holding a sign 'degree without debts’.

Student loans have to be necessarily paid off even
if they declare for personal bankruptcy in the United States.