Today, there was a tornado in Illinois,
which is situated in the state of Washington IL.
Another great storm has stroke the earth since
five thousand people died in the Philippines due to it.
There are tragedies due to weather changes all over the world.

According to the site, http://www.weather.com, the storm
which has been caused in the area of Illinois,
is not as devastating as the large one in the Philippines.
However, a storm is always an danger.
How can the weather problems be fixed?

Snow has fallen in Seoul, the capital city of South Korea on the year of 2013.
South Korea has clear different seasons-3rd~6th month-spring,
7 ~ 8th month-summers, 9~11th month, fall and 12 ~ 2th months is winter.
This year, snow has fall earlier than usual,
it seems like the Christmas season already.
Korean weather is the most stable.
No great storm or tornado has happened so far,
there’s always four seasons. 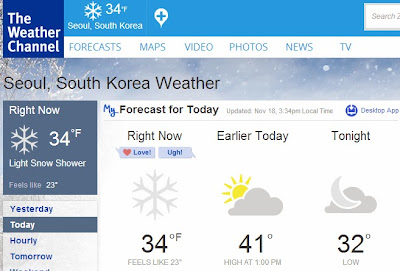 The weather problems in the U.S and Philippines are not just their problems.
About twenty people are reported to be missing due to the storm in the Philippines.
Furthermore, numerous Koreans live in the U.S.
Let’s hope for peace in the word weather …