Kpop star Brody, a young participant from the US, finally dropped out of the contest in the third season of K-Pop Star. (Brodie has American nationality. Her mother is Korean, while her father is half Spanish and half Finnish.)

Although Brodie is quite young, she(brody) made it through the previous rounds without dropping out of the contest. While doing the team mission, she had to team up with other contestants randomly for a team performance. As an individual contestant, kpop star Brody was in the low-rank group at the beginning.

However, she was able to induce unanimous consent from the judges by improving her voice and breathing within a week. Regardless of such effort, she finally dropped out of the contest due to failing to show her talent for the team mission. 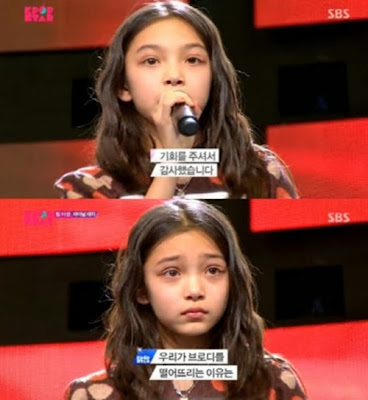 Jin-yeong Park, CEO of JYP Entertainment and one of the judges of K-Pop Star, said, "I think that it is time for you to have some rest. I believe that you will come back later after improving your talent and ability." Brodie said, "Thank you for giving me such a chance." Her tear made everybody feel sorry for her. That night's episode of K-Pop Star Season 3 showed the record-high audience rating of 11.7%, which was 0.1% higher than the previous week. The show seemed to induce a great level of popularity.

Meanwhile, Willy Yao (姚伟涛) from China made every judge amazed and surprised with his magnificent performance on the stage, winning the team mission.

K-Pop Star Season 3, a Korean music audition program. Anyone who wins the contest will be able to become the winner of various music programs, take TV advertisements, release music albums and carry out foreign music tours just like the previous winners. The audition program is currently in its 8th episode among 20. It will soon be possible to figure out who would win the third season of K-Pop Star.