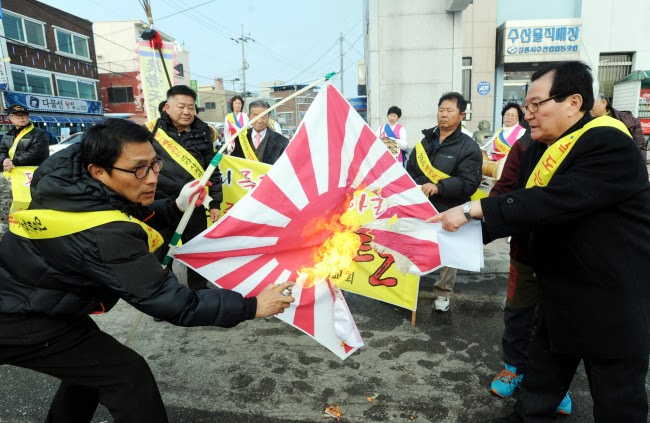 Protestors set a Japanese rising sun flag alight during a protest over the disputed Dokdo Islets in Gangneung City, Gangwon Province, on Feb. 21. Foreign embassies unintentionally stepped into the controversy and became targets of criticism here by using country domains of Google Maps with the place names “Liancourt Rocks” and “Sea of Japan.”

An obvious task of any foreign service officer is to avoid controversy but, sometimes that is easier said than done, as even the map used on a foreign embassy’s web site in South Korea can stir passions.

The Justice Party, a small progressive political party here, found that 16 out of 17 foreign embassies with maps on their websites displayed neutral or Japanese friendly place names ― “Liancourt Rocks” and “Sea of Japan” ― for designations that South Korea insists are the Dokdo Islets and East Sea.

The 16 foreign embassies utilized Google Maps through their respective country domains. Google Maps usually, though not always, uses the Japanese-preferred designation of “Sea of Japan” and the more neutral-sounding “Liancourt Rocks.”

Only the Israeli Embassy here used the Korean country domain of Google Maps which designates the islets east of Ulleungdo Island as “Dokdo” and the body of water between South Korea and Japan the “East Sea.”

A diplomat from a Latin American country said they put a map on their web site “to help their Nationals find our embassy in Seoul,” adding that the embassy uses the country’s domain in case of an emergency “because many of our Nationals cannot speak English or Korean,” she said.

Google Maps is available in about 130 country domains and 60 languages, including South Korea and Korean.

“We understand that there is a language barrier and that the foreign embassies do not want to use Naver, but they should make an effort,” said Lee Seong-hwan, communications director at the Justice Party, which issued the report in mid-February.

“It is a way for the foreign embassies to show proper respect toward Korean citizens,” Lee said.

For the Israeli Embassy’s Deputy Chief of Mission David Levy, using the South Korean country domain on the embassy’s website was a public diplomacy decision.

“We are all shifting from traditional diplomacy to modern public diplomacy. The Internet is a very important working tool,” Levy said. “We all have to pay more attention to using it and, more importantly, in how we are using it. We, in Israel, take public diplomacy very seriously.” The embassies of China, Japan and the United States do not employ Google Maps on their websites, and they were not included among the 16 countries named by the Justice Party. 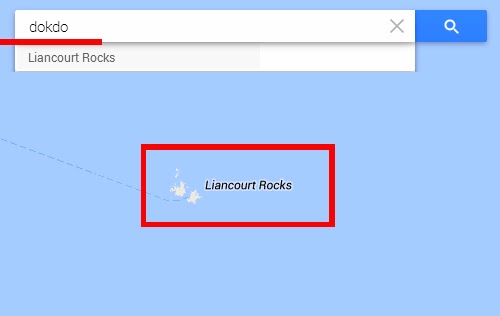 The above is a screenshot of the map on the Russian Embassy’s website taken on Friday. The Russian Embassy uses the Google Maps Russian country domain, which displays “Liancourt Rocks” and “Sea of Japan” place names.

Neither the South Korean nor Japanese governments approve of the place names in Google Maps. The Japanese government has even called on its government offices and state-run universities to stop using Google Maps, though many have reportedly failed to follow through with its request on account of the convenience of the Google service, according to media reports.

An official at the Ministry of Foreign Affairs said the ministry is communicating with the foreign embassies about the issue. “If we raise the issue very officially, then I do not think it is good. So, we just communicate with them in an unofficial manner,” said Che Dong-hwan, director of the Territory and Oceans Division at the ministry.

Che said the maps used by the 16 foreign embassies only became an issue after the Justice Party’s mid-February report, but he can see that it has everything to do with Google Maps and not any policy position on the part of those countries.

“The only thing they can do is choose which domain they will use,” Che said. “This is the situation. It is not a problem. We will communicate with our counterparts at the embassies that once you are here, why not use the Korean domain, and not a third country domain.” The countries called out by the Justice Party in its report include France, Thailand, Indonesia, Spain, Italy, Poland, Ecuador, Chile, Sweden, Finland, Serbia, Ghana, Iran and Russia.

The embassies of these countries either deleted the place name altogether for the islets that South Korea calls Dokdo or designated them as Liancourt Rocks. They called the body of water between South Korea and Japan as “Sea of Japan,” which South Korea insists is the “East Sea.” Lee said the Justice Party received responses from only the Swedish and Spanish Embassies with regard to its report.

“Our website is designed more for Koreans interested in Israel, to find the embassy, find materials, communicate with us, write us, call us. We translated a lot of material into Korean to make it handy,” Israeli Embassy’s Levy said, adding that the Israeli Embassy’s facebook page is updated frequently with this in mind. “We felt as diplomats we did a good job because you have to be very sensitive about terminology in whatever country you are. We are happy that people noticed that we pay attention.”