Japan should make a formal apology for the case of Korean Comfort Women !

Japan should make a formal apology for the case of Korean Comfort Women !


Korea was a Japanese colony between 1910 and 1945.
Therefore, it has been passed 70 years after liberation of Korea from Japan.
At that time, Japan soldiers invaded Korea,
and the case was caused by sex slavery of Korean female forcibly.
It is so-called the case of Comfort Women.
For the terrible 'case of sex enslavement' of Korean female forcibly Japanese
politician, Yohei Kono, in Aug. 1993 made apology.

By the way, in Mar 2014 Japanese Prime Minister Abe announced,
that 'the written apology of Yohei Kono in 1993 must be verified again'
and 'possibly corrected'.
And Japanese Vice-Minister of Education made the absurd
remarks of 'the case of
Comfort Women was fabricated" and insisted, that Yohei Kono,
who announced the written apology in 1993, should be summoned to
National Assembly and we have to hear his testimony.

Do you remember the Holocaust by Hitler's Nazi Germany?
At that time, the mostly damaged country was 'Israel'.
At the moment German Chancellor expands
'movement of anti-discrimination against Jew' worldwide for Israel.
And also Germany still apologizes for
Jewish problem with the phrase of 'feel the deepest sadness and shyness'.
However, what do you find from Japan comparing to Germany? 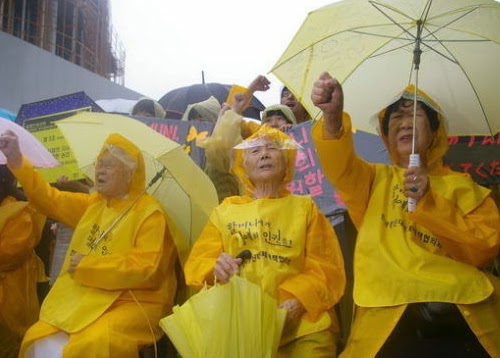 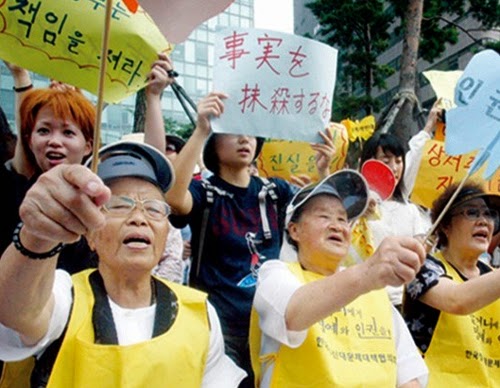 The kidnapped Korean girls as a sex slavery by
Japanese soldiers now became a grandmother.
The grandmothers still hold a rally on
every Wednesday and demand Japanese apology.
What they want is only a formal apology from Japan and no more.
But their wishes are not still accepted by Japan, from 1992 to the moment it has
been lasted for 23 years, and it is recorded as a longest historical rally in the world.

Today is Wednesday.
It must be the Wednesday with tear.
The continued sorrowful crying of grandmothers in front of the Japanese Embassy
and the ugly political actions by Japan should be spread overseas.