S. Korean cartoons on Japan's wartime atrocities to be exhibited in France in September

S. Korean cartoons on Japan's wartime atrocities to be exhibited in France in September


A group of South Korean cartoonists will exhibit their works depicting Japan's past wartime atrocities at a French cartoon festival later this year,
local groups said on Sunday.

A total of 33 South Korean cartoonists are planning to exhibit about
50 comic strips at the international comics festival to be held at St. Just-le-Martel in September, according to the Institute for Research in Collaborationist
Activities and the Association of Korea Editorial Cartoon.

The annual festival marks its 33rd year this year and draws more than
800 cartoonists from around the world. The South Koreans' works will focus on Japan's wartime crimes during its early 20th-century imperialism and 46 years of colonial rule over Korea that started in 1910. Japan's renewed nationalist behaviors in recent years will also be featured in the cartoons, including its recurring territorial claims to Dokdo,
South Korea's easternmost islets. One of the works to be displayed will depict Japanese Prime Minister Shinzo Abe's recent visit to the controversial Yasukuni war shrine, highlighting the country's unrepentant attitude toward its past wrongdoing compared with
Germany's repeated apologies given to victims of Nazi Germany, the groups said. 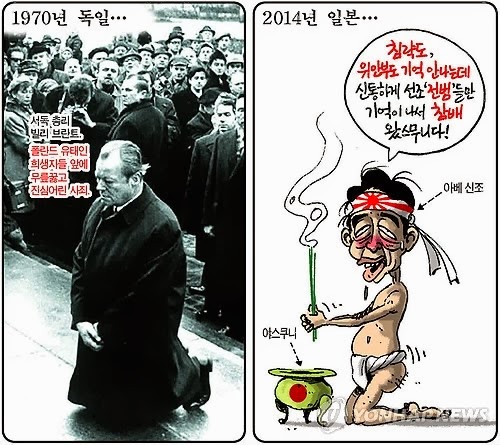 The Japanese shrine honors its war dead, including
14 Class-A war criminals from World War II. "I hope these small actions by the cartoonists will stop Japan from repeating imperialist atrocities," Lee Hee-jae, one of the participating cartoonists, said.

During the 10-day cartoon festival, a forum will be held at a nearby village with victims of Nazi Germany and Japan's wartime sexual enslavement, according to the South Korean groups. Similar South Korean cartoons on Japanese sexual enslavement drew some 17,000 visitors during the 2014 Angouleme International Comics Festival held from Jan. 30 to Feb. 2 in the namesake French city. Historians say up to 200,000 women, many of them Korean, were coerced into sexual servitude by the Japanese army at front-line brothels during WWII when the Korean Peninsula was a Japanese colony.

Japan, under the nationalist Abe administration, is attempting to whitewash its history of wartime aggression and restrengthen its military capacities. Japan's nationalist actions have severely frayed relations with South Korea and China.