The semi-final stage of K-pop Star 3
was the position of dropping-out one out of three,
Sam Kim, Bernard Park and Kwon JinAh.
And Kwon JinAh was that the dropout.
Kwon JinAh, the only female singer and a 17-year-old high school student of
semi-final, was dropped out before the final stage.

K-pop Star 3 shall be terminated by the final TOP 2 next week through the long
journey for eight months. Hereby, this winner of the K-pop Star 3
shall be one of Sam Kim and Bernard Park. 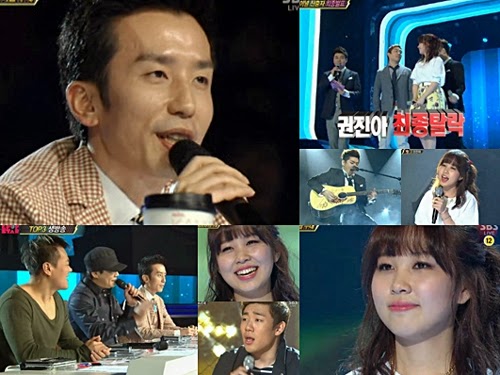 Kwon Jin Ah sang 'Love' of Primary, Bernard Park sang 'Who's lovin' you' of
Jackson Five's and Sam Kim sang 'Honey' of Park JingYoung.
Kwon JinAh mentioned placid, "I do not regret now because I did my best. Thanks
all of you for a lot of praise, and for me you have been done too much.".

But she must be a regrettable dropout.
Her dropout is not the end, because a new debut will be announced soon.
So far, many various singers, though not a winner, but attracted popularity, have
been debuted successfully.
It is expected, that she will debut through "AntennaMusic",
the agency of Yu HuiYeol, in the official.
Already, K-pop Star is born. The first birth might be Kwon JinAh.