Bentley, the Governor of Alabama, said that
“Although Alabama is currently one of the best automobile manufacturing regions
in the entire nation,
its automobile industry was still in its infancy when
Hyundai Motors just entered our state 10 years ago.”
He also added that “South Korea’s global brand Hyundai provided a high-tech facility
in Alabama, and enhanced the residents’ living standard and class of Alabama.” 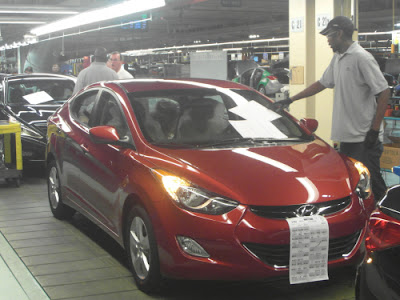 Thanks to Alabama’s unconditional love toward Hyundai,
the proposed site for Hyundai Motor’s second U.S. factory
has also been narrowed down to be built in Alabama.
The State of Alabama has offered the best conditions to Hyundai Motors.

Japan is Capable of Changing the Past

Japan is Capable of Changing the Past

One cannot change the past.
But there are some people who are trying to.
They are the bureaucrats of the Japanese government.

Japan colonized Korea from 1910 to 1945.
At that time, Japanese soldiers forced Korean girls into sexual slavery.
Even Japan’s Prime Minister Abe is well-aware of this fact,
but does not apologize about it.
Some Japanese politicians also do not admit this fact at all either.
Also, they pressured publishers to modify the content on
sex slaves by Japanese soldiers in U.S. high school textbooks. 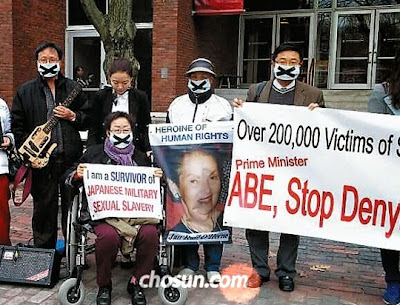 McGraw-Hill, an American textbook publisher, said that
“The representatives of the Japanese government asked us to change the
description about sexual slavery committed by Japanese military.
However, scholars’ stance on the historical fact of sexual slavery does not change.”
Before, 19 scholars of American Historical Association
also issued a statement and criticized that
“We cannot repress our astonishment at Japan’s attempt to distort history.”

There are way too many conservative people living in Japan.
Their political position will become unstable if they admit the past,
and thus they cannot turn the past because of their country’s political orientation.

In April 2015,
Japan’s Prime Minister Abe visited the U.S.
During his tour in the U.S., he delivered a speech in Harvard,
one of the most prestigious universities in the world.
In a free discussion time, a Korean-American student threw him the following question.
"There are solid proofs showing that the Japanese government and
military were directly involved in the Comfort Women system.
In the face of all these facts, do you still deny the Japanese government’s
explicit involvement in the subjugation of hundreds of thousands of
women in the coerced sexual slavery?” 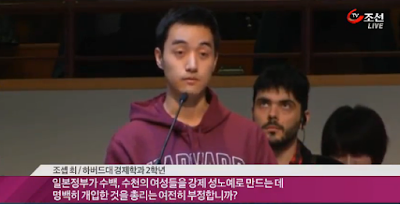 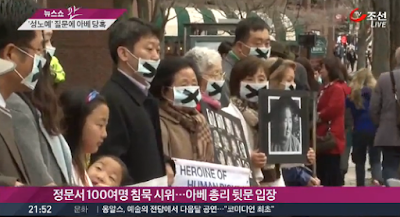 To this, Prime Minister Abe answered that
"My heart aches when I think about the victims of human trafficking
who had indescribable sufferings.”
A vague response. It is hard to tell who did the human trafficking just with that answer,
and it is so doubtful why he never says he apologizes..
Also, the term sexual slavery, which Japanese soldiers did to satisfy
their sexual desire, is more appropriate than human trafficking. 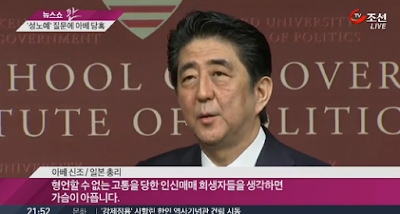 Japan never apologizes for its past.
It is completely different from Germany.
Abe raised antipathy by entering from the backdoor to avoid
demonstrators who demanded Japan’s regret for the past.
Why does Japan have no regret???? Japanese politics is very ironic.

Shampoos we generally contain surfactant.
With the advent of shampoo came “scalp trouble.”
New industries such as hair loss center and
scalp care program were born to prevent scalp trouble.
This is all because of sodium laureth sulfate (SLS),
a bad ingredient inside shampoo.

That is, we use shampoo to improve our scalp and hair,
but shampoo contains SLS, which damages a person’s scalp and hair.
What neglecting this terrible fact are the “firms selling shampoo.” 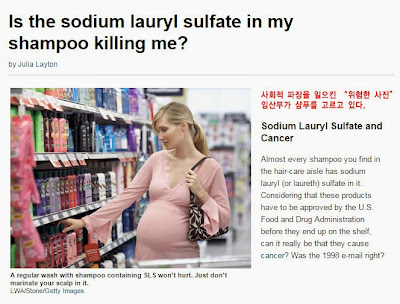 This scene shows a pregnant woman choosing shampoo.
A movement for not using shampoo is popular in Korea and throughout the world.
In “if you are too picky about everything, you can’t do anything” attitude,
Consumers purchased scalp trouble by
paying their own money to put toxic SLS on their hair.
Are they clever enough to exceed “shampoo companies’ marketing”?


Google Campus was established in Korea, the 3rd in the world and 1st time in Asia.
Except the Google Campus in the U.S., it is the 3rd Google venture center
preceded by London, U.K. and Tel Aviv, Israel.
The south of Seoul is called “Gangnam,” and it is that Gangnam from
“Gangnam Style,” which you are very familiar with.
The size of “Google Campus Seoul” is 2,000㎡ in Gangnam, Seoul.

The discussion on founding "Google Campus Seoul” was started in April 2013
when President Park, Geun-hye and Larry Page, the CEO of Google, met. 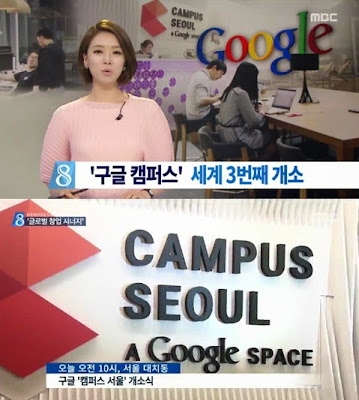 Korea has the fastest internet in the world.
It is home to Samsung, LG, Hyundai, and Kia Motor.
In other words, one of your cell phone, lap top, computer, TV, and car is made by a Korean company.
As you know Psy’s Gangnam Style, Korea is a cultural powerhouse.
It is close to China. China trusts Korea.
Chinese people’s favorite products, movies, and music are all Korean.


SNL, a famous comedy show in the world,
is currently being aired through a cable channel in Korea.
Among its episodes, the GTA parody drew popularity,
and its parody of Sims game
also arouse empathy from many people.

Youths in Korea have a great ambition and strive hard to achieve it,
but they have to live an "ordinary" life as a salaryman,
or even cannot become a salaryman and still have to live off their parents.
The parody made a comedy of the joys and sorrows of the youths
in this intense employment competition in Korea. 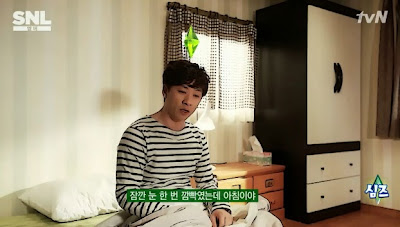 Korean society is very harsh on its young adults.
One of the bestselling books was titled "It's Painful, That's Youth."
Why does Korean society consider pain is normal for youths?
No comments:

Japan Designates a Crime Site as a UNESCO Heritage?

Japan Designates a Crime Site as a UNESCO Heritage?

UNESCO homepage explained that
"Auschwitz concentration camp is the site of Jewish genocide and
clear evidence of a felonious, atrocious crime on humanity by the Nazi,"
as a reason for designating the camp as a UNESCO world heritage. 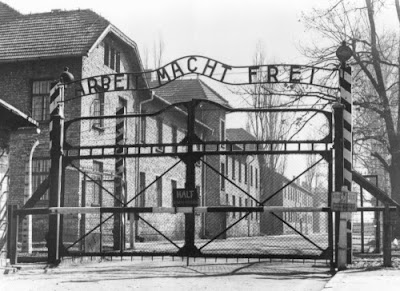 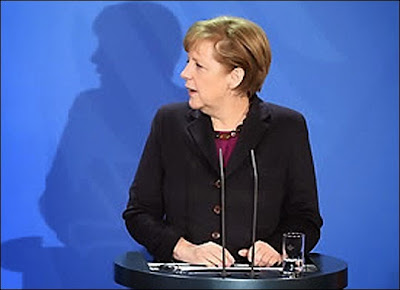 In Japan, there is also a crime site that is as brutal as Auschwitz Concentration Camp.
Industrial facilities where Koreans were forced into labor exploitation,
massacre, and sexual slavery are still preserved in Japan.
Japan claimed to designate the site as a UNESCO world heritage,
as "cultural remains of Japan's industrialization," not as "reflection on the past."

I want to ask Japanese people.
UNESCO registration that the Japanese government is pursuing..
Is it really a proof of industrialization?
Why can't Japan repent of its past like Germany?


Japan’s Prime Minister Abe (あべしんぞう, 安倍晋三) is currently touring the U.S.
During his tour, he visited the Holocaust Museum in Washington D.C.
Koreans are holding a protest in front of the
U.S. Congress, demanding Abe to “apologize for the past.”
During the Second World War, Japan forced many Korean women into
sexual slavery for the Japanese military.
Japan says that such historical record is heartbreaking,
but never uses the word “We apologize” in any case.
Sometimes, Japan makes a thoughtless remark that
“Doesn’t everyone do that during wartimes?” 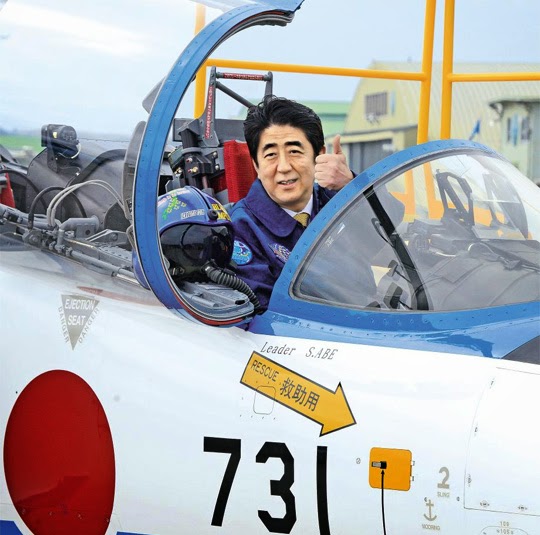 It is unimaginable that Prime Minister Merkel
of Germany rides a plane with the Nazi mark on.
However, it is possible in Japan.
Unit 731 is a name of a very notorious Japanese military that carried out
medical experiments on living human body as maruta.
Abe is the one who rode Unit 731’s plane and lifted his thumb up.


I watched Avengers 2, also called ‘The Avengers: Age of Ultron, 2015’
I will come straight to the point. It is a very boring, American computer graphic movie.
It did not have any story. No heart-warming line, and no overwhelming scale at all.
Also, American jokes that break the flow of the movie were too much.
This is of course the same for Transformer series.

Avengers 2 filmed some of its scenes in Seoul, the capital city of Korea.
Last year, Seoul blocked some roads and controlled the traffic for the movie filming.
It also applied the existing Korean policy of refunding
30% of the movie production cost.
MARVEL not only reduced its production cost and also gained
the promotion effect in the world’s 3rd largest movie market. 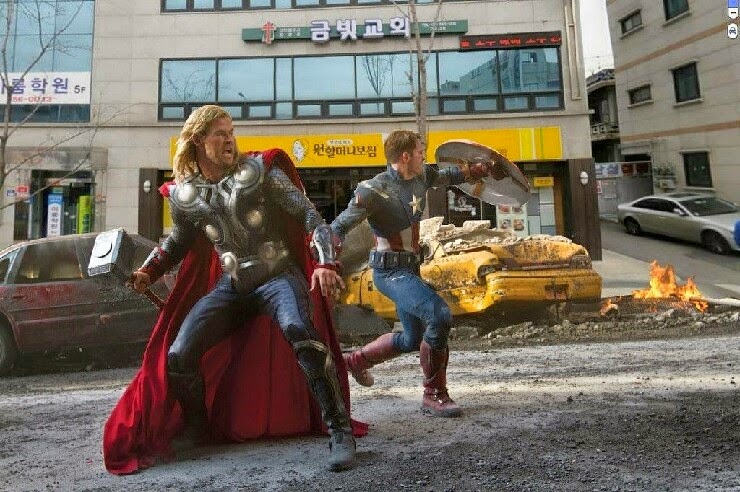 When the movie just came out,
all main actors of the Avengers visited Korea and had a showcase.
Entertainment broadcast programs also covered this event heavily.
Avengers 2, which started as a “famous movie,”
is however facing cold reaction in the Korean market.

Avengers 2 is a boring, common movie.
If Avengers 3 comes out, I will just watch it on DVD at home.
No comments: